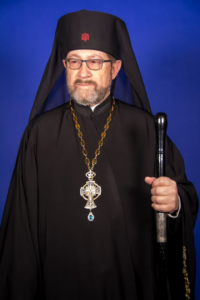 In 1949, I was baptized a Roman Catholic: Joseph-Leo-Gaétan Giroux. I became a Catholic Friar in my 20’s but, after seven years, spiritually dissatisfied with all the changes that came about since Vatican II (11 October 1962 – 8 December 1965), I left the Roman Catholic Church and joined the Old Catholic Church (separated from Rome in 1724). I was eventually ordained a priest within that Church: I would be serving also within the Anglican Church as we were in ecclesiastical communion.

Early in 1987, I encountered Orthodoxy and realized after some lengthy readings and searching that I needed to leave everything behind me and join the True Church of Christ: I wanted to go back to the roots of Christianity and join myself to the Ancient Faith as it is found today in the Orthodox Church. There is a saying from St. Vincent of Lérins which says that all Christians must follow that Faith which has been believed "everywhere, always, and by all." I found myself joining the Greek Old Calendarists and, therefore, becoming non-canonical. I struggled and suffered about this situation for many years and I didn’t know how to leave and find my way to the official worldwide Orthodox Church.

Over the years, I was tonsured with the name ~Nicolas ~ (which I adopted legally) into the Monastic degrees (up to the Great Angelic Habit), ordained a Presbyter (1987), and elevated to the rank of Archimandrite (1993) and Mitrophore (1999).

On the 21st of October 2003, I was canonically received within the Clergy ranks of the (now) Romanian Orthodox Metropolia in the Americas, Patriarchate of Romania. Soon afterwards, Metropolitan Nicolae asked me to undertake a Mission in Toronto to meet the needs of English-speaking Orthodox and converts. But a year later, the Metropolitan enquired with me if I would be willing, instead of the Mission, to focus my efforts on preparing the way to establish a Monastery.

I eventually rented an Anglican Rectory in North York where we could have our headquarters. It was a slow process until Hierodeacon Mardarie (Tofan) came from the Archbishopric of Constanta, Romania, to support our efforts: he arrived late December 2008.

On the 1st of August 2013, we officially transferred from Toronto the Holy Cross Monastery on a 17 acre property in Mono Mills, Ontario (North of Toronto). Unfortunately, for difficult reasons which I prefer not to linger onto, in October of 2015 I was resigning my functions as Abbot of Holy Cross Monastery with the approval of the Eparchial Council.

And now, as of the 6th of August 2018, Feast day of the Holy Transfiguration, I have become a member of the Communauté monastique orthodoxe de la Protection de la Mère de Dieu, in Wentworth, Québec. I went under the omophorion of H. E. Metropolitan Michel from Paris in France (for the Diaspora) within the jurisdiction of the Patriarchate of Kiev, now the official and canonical Orthodox Ukrainian Church under Constantinople since January 6, 2019.

Today, I live my monastic life within “the world” continuing my monastic struggle and commitment in the service of Our Lord, God and Savior, Jesus Christ with hope in His words: “He who endures until the end, that one will be saved.” (Mat. 24:13)