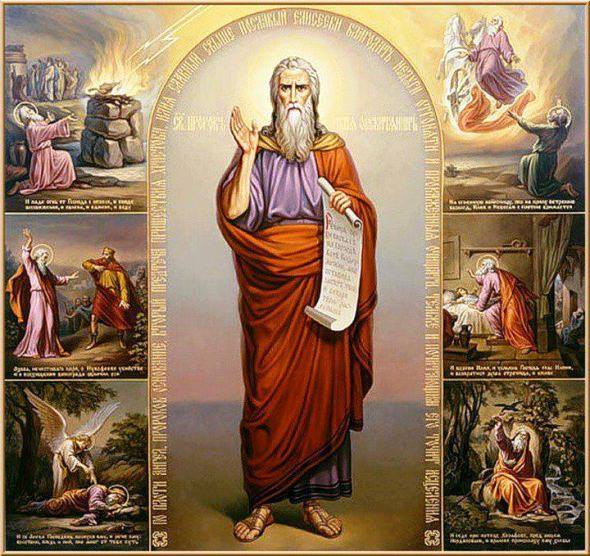 The prophet Elijah urged the people of ancient Israel to turn from sin and to return to the true God. His message is just as important for us today.

About a hundred years had passed in ancient Israel since the time of King David, who had set a high standard of faithfulness and integrity in serving the one true God. Now a wicked king named Ahab did more to provoke God to anger than all the kings of Israel who had come before him (1 Kings 16:33): the date was around 870 B.C.

The apostasy during Ahab’s reign was the result of many years of corrupt kings and increasing evil, until wickedness filled the land. A majority of the people had yielded to Satan and his demons through their worship of the Canaanite gods Baal and Ashtoreth. Still, God had declared that there were 7,000 persons in Israel who had not worshipped Baal during that very wicked time (1 Kings 19:18).

Earlier, God had sent warnings and waited patiently for His people to separate themselves from the pagan influences that surrounded them and to return to true worship (1 Kings 14:6-16). Now God was going to bring a severe judgment on the nation to stir them to action.

God explains, “Surely the Lord GOD does nothing, unless He reveals His secret to His servants the prophets” (Amos 3:7). To announce the punishment and warn the nation to change its ways, God sent a messenger, Elijah the prophet.

Elijah’s first miracle
Elijah is first mentioned in Scripture when he declares to King Ahab that a severe drought would begin immediately to test Israel and its leadership. “Elijah … said to Ahab, ‘As the LORD God of Israel lives, before whom I stand, there shall not be dew nor rain these years, except at my word’” (1 Kings 17:1).

Withholding rain for 3½ years was the first miracle God did through the prophet. This would bring severe famine throughout the kingdom. The purpose of this punishment was to bring the nation to repentance of its idolatry. Although unpleasant at the time, Elijah likely understood the potentially good effects of such punishment if Israel would repent of its sins. God always determines the magnitude and duration of punishment that He brings; and in this case, He moved Elijah to pray for an end of the rain and later for it to begin again.

Elijah the man
God appointed this man of the desert regions to go before kings, bringing the message of warning and repentance. Elijah the Tishbite, of Gilead, was a human being just like any of us—a man of similar hopes and dreams, weaknesses and shortcomings, but also a man of deep faith in God. Elijah was a bold, direct-to-the-point prophet of God. By speaking the prophecies of God, he made fierce enemies, but his enemies could not overpower him.

The apostle James would later speak of Elijah’s faith saying, “Elijah was a man with a nature like ours, and he prayed earnestly that it would not rain; and it did not rain on the land for three years and six months. And he prayed again, and the heaven gave rain, and the earth produced its fruit” (James 5:17-18).

Elijah chosen by God
Like many of the prophets, Elijah did not seek to be God’s messenger. Instead, God chose him for the job. Once called, Elijah did not hesitate to take on his mission, even though it appeared that his life would be threatened by the wicked king. Elijah set out at once for the capital city of Samaria to deliver the announcement to King Ahab. Then God sent Elijah into hiding as the drought dried up the streams and withered the crops of the nation (1 Kings 17:7-15; 1 Kings 18:1).

The prophets of Baal were humiliated when they couldn’t invoke their pagan god to end the drought and bring the needed rain upon the land. King Ahab and his officials were furious with Elijah, thinking that he was the cause of so much suffering in Israel; and they hunted for Elijah far into foreign lands (1 Kings 18:10).

Finally, the prophet was directed by God to appear before King Ahab again. “Then it happened, when Ahab saw Elijah, that Ahab said to him, ‘Is that you, O troubler of Israel?’ And he answered, ‘I have not troubled Israel, but you and your father’s house have, in that you have forsaken the commandments of the LORD and have followed the Baals’” (1 Kings 18:17-19).

Showdown at Mount Carmel
Elijah’s greatest public miracle involved a contest with the 450 prophets of Baal and the 400 prophets of Asherah on Mount Carmel. Elijah invited these false prophets and all Israel to a demonstration to show that Baal had no power at all against the God of Israel. The outcome would demonstrate who served the true God (1 Kings 18:19-40).

To show God’s power, Elijah told the large crowd, “I alone am left a prophet of the LORD; but Baal’s prophets are four hundred and fifty men” (1 Kings 18:22). Elijah continued, “How long will you falter between two opinions? If the LORD is God, follow Him; but if Baal, follow him” (1 Kings 18:21). God would give convincing proof that day that He was Israel’s only true God.

So the contest commenced. Throughout the day, the false prophets called on their god to send down fire and consume an animal sacrifice—but to no avail. At the end of the day, Elijah called on Israel’s God to send fire to swallow up the sacrifice prepared for Him. God responded to Elijah’s prayer. In a moment thousands witnessed the fire from heaven consume the carcass, all the water in the trench and all the wet wood, burning up even the stones!

Elijah exposed the deception of the false prophets of Baal and at last the hearts of the Israelites were convinced that only Israel’s God could do this miracle. Elijah then ordered that the false prophets be executed (1 Kings 18:36-40). Then God’s Spirit moved Elijah to pray that it would rain; and the rain came, ending the terrible drought (1 Kings 18:42-45; James 5:18).

God’s prophets are hated
When the false prophets of Baal were dead, Elijah came under a death threat by Jezebel, the wicked wife of King Ahab. As Israel’s queen, she brought the worship of her god Baal into the nation, influencing King Ahab to worship Baal and set up idols in Israel (1 Kings 16:31; 1 Kings 21:25-26). God’s prophets who bring messages of warning are often hated and accused of actually being the cause of such suffering. Jezebel and the false prophets of Baal hated Elijah, and they spared no effort to catch him.

In a moment of human weakness Elijah was deeply discouraged, but it wasn’t long before God reassured Elijah and sent him back again to face King Ahab. Elijah was to deliver the message that Ahab and Jezebel would both die a humiliating death because of all the wicked deeds they refused to repent of (1 Kings 21:20-24).

History is being repeated: the world today still has its ‘Ahabs’ and ‘Jezebels.’ The present age also has its idolatry, though it is more subtle than that of Elijah’s day.

The shrines of pagan worship may not be as visible in a basically Christian-professing society, and there may be very few carved images that people actually worship, yet millions are following after the gods of this world. Today’s idols can be riches, fame, pleasure and the pleasant-sounding fables that occupy the hearts and minds of many who are unwilling and disinterested in learning about God.

An end-time Elijah
Sometimes prophecies can have multiple fulfillments. Bible prophecy seems to point to another Elijah-like work that will arise at the end of this age before the coming time of God’s great wrath upon the earth. The prophet Malachi declared, “Behold, I will send you Elijah the prophet before the coming of the great and dreadful day of the LORD” (Malachi 4:5-6).

Similar to the way John the Baptist came “in the spirit and power of Elijah” (Luke 1:17), this end-time fulfillment will feature a commission much like the one of the first Elijah. Scripture indicates that an Elijah-like message to repent and obey God will be preached by the Church of God (Matthew 24:14; 28:19-20).

What God wants today
We can learn about the message of the final Elijah by studying the mission of John the Baptist. Gabriel brought a message from God that a prophet was coming to announce that Jesus was the Christ, the long-awaited Messiah. John the Baptist was that prophet, and Jesus declared that John was an Elijah-like figure, in addition to one who would come later (Matthew 11:14; Matthew 17:12).

An angel declared of John’s mission: “And he will turn many of the children of Israel to the Lord their God. He will also go before Him [Jesus] in the spirit and power of Elijah, ‘to turn the hearts of the fathers to the children’ and the disobedient to the wisdom of the just, to make ready a people prepared for the Lord” (Luke 1:16-17).

The messages of Elijah and the other prophets of the Old Testament played an important role in the establishment of the New Testament Church. Paul told Church members of the first century that they were part of the household of God that had “been built on the foundation of the apostles and prophets, Jesus Christ Himself being the chief cornerstone” (Ephesians 2:20, emphasis added).

At the time of the end, just before the great and dreadful day of God’s wrath, the world will again be given the same message that was preached by Elijah the prophet. As noted, Malachi 4:5-6 seems to indicate that an Elijah-like work will be done before Christ’s return. Furthermore, as the world enters this time of judgment, two witnesses will be given power to stop rainfall for 3½ years—this time over all nations.

Christ says, “And I will give power to My two witnesses, and they will prophesy one thousand two hundred and sixty days (over 3 years), clothed in sackcloth. … These have power to shut heaven, so that no rain falls in the days of their prophecy; and they have power over waters to turn them to blood, and to strike the earth with all plagues, as often as they desire” (Revelation 11:3, 6).

God will take no pleasure in sending these judgments, and disobedient nations will need to be reminded of God’s purpose for them: “‘Do I have any pleasure at all that the wicked should die?’ says the Lord GOD, ‘and not that he should turn from his ways and live?’” (Ezekiel 18:23; see also Ezekiel 33:11). The message of the two witnesses will again be like that of Elijah. It will be a call to repentance and of preparing a people for Christ’s second coming.

Elijah is considered one of the most important prophets of the Old Testament. He faithfully carried out God’s mission in the face of danger and hardship. His was a singular voice of “one crying in the wilderness” to rebuke sin in the land and to expose the false prophets and false religions of his day.

In Elijah’s day a revival of true worship was begun. God continued the course He had for His people through the next prophet sent to Israel. Elijah’s whole life was devoted to the work of restoring true worship in Israel. His admonition that God’s people faithfully serve Him with their whole hearts remains important for us today.