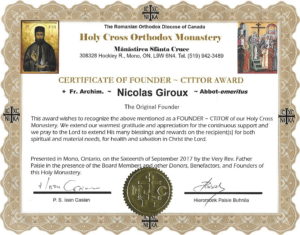 The glorious Elijah, the Angel in body, the pillar of the prophets and second forerunner of Christ’s advent, by sending grace from on high upon Elisha, dispels diseases, purifies lepers and  overflows with healings for those who honor him.

A few years ago I was the Abbot of Holy Cross Orthodox Monastery first established in Toronto and then transferred to the country side of Mono Mills, Ontario (within the period of September 2007 and October 2015).  For many difficult reasons I decided to resign my duties as Abbot and to leave the Monastery I had founded with the approval of the Eparchial Council.

And now, on the Feast Day of the Holy Transfiguration ~6 of August 2018~, I have also officially left the ranks of the clergy of the Romanian Orthodox Diocese (please see the page on “Father Nicolas” for more information).

For the Romanian Diocese, my status was that of “retired,” just a name on a list of clergy.  Nevertheless, even if retired from my functions as Abbot, of course that I was never retired from my monastic commitment or vows.  I have been tonsured as a Monk in the service of Christ and my duty to Christ and His Church, today as a priest-monk, will remain until the end of this earthly pilgrimage.

I had been hoping and praying that our Diocese would bless me to establish an official Skete for myself ~for my continuous spiritual battle especially now that I am right in the midst of this secular world~ but this was categorically refused by the Eparchial Council!  Except that now, being a member of the Brotherhood of the Monastery dedicated to the Protection of the Mother of God in Quebec, I have the blessing to pursue in Ontario my desire to establish a Skete: God willing!  The “Skete,” (where I actually reside) is my monastic arena, where I struggle daily to stand humbly before the Lord, in peace and quiet, the Hesychia or “inner stillness” of my soul.

With this personal website (which I dedicate to the Holy Prophet Elijah, the patron of the Skete), I intend to keep you informed with some of my activities; to post pictures of former events in order to remember all those people who have taken part in the growth of Holy Cross Monastery; to post spiritual reflections and different readings concerning the Prophet Elijah.  I remember this solitary figure on Mount Carmel (garden of God), one-on-one with God, refreshed by the brook of Cherith and fed daily by a raven.  He is an image of faithfulness to the One True God of Israel; the prophetic voice calling for the people to return to Yahweh; a prefiguring of the future hermits and monks to come who will be ardent and zealous for Christ, the Lord.

The religious design for this site is inspired from the Logo of the Brothers of the Blessed Virgin Mary of Mount Carmel, a Catholic religious order of “Carmelites” first established as hermits on Mount Carmel in the 13th century. I have kept the Star of David because the Prophet Elijah is part of the history of Israel. The mountain is Mount Carmel crowned by the Cross as Mount Carmel draws the soul to our Triune God. One star holds the icon of Christ and the other holds the icon of the Blessed Virgin Mary. On the mountain is a star with the Prophet Elijah. In the blue sky, on the left, there is a small white cloud: it could have been much smaller! For over three years there was a drought in Israel through Elijah’s prayers. There would be no rain until the day the people understood and decided to leave the false worship of Baal and to return to Yahweh, the only True God. By a great miracle of fire from heaven burning the offering he made to God, Elijah proved on Mount Carmel that he was serving the one true God. He then prayed the Almighty God to provide rain for His people. After a seventh prayer, a tiny cloud appeared in the bright blue skies… and the much needed and blessed rain came.

In the footsteps of Elijah, I continue to climb, in spirit, the steps of Mount Carmel, the image of monastic life, of asceticism.  I look to him for inspiration and guidance; his love for God and his zeal inspire me which begs the question:  Is there still need for monks today?  What is their use?  What can one monk, all on his own, separated from all, be of benefit to anyone?  I’d like to share an anecdote with you: ~ Someone was asking an Abbot as to how necessary was the life of a Monk in our days, if not only to make cheese, unhealthy chocolates, or candles. The abbot answered that the Monk doesn’t have to justify his vocation but only to live truthfully every day experiencing the certainty that his vocation is not for himself alone but that his vocation has a “mystical fertility” at the heart of the Church and of the world.  He has the assurance that his uselessness may still be useful, being good for nothing, except to attract attention onto God, the only thing necessary~.  Glory to You, O Lord!  Slava Tie, Doamne!