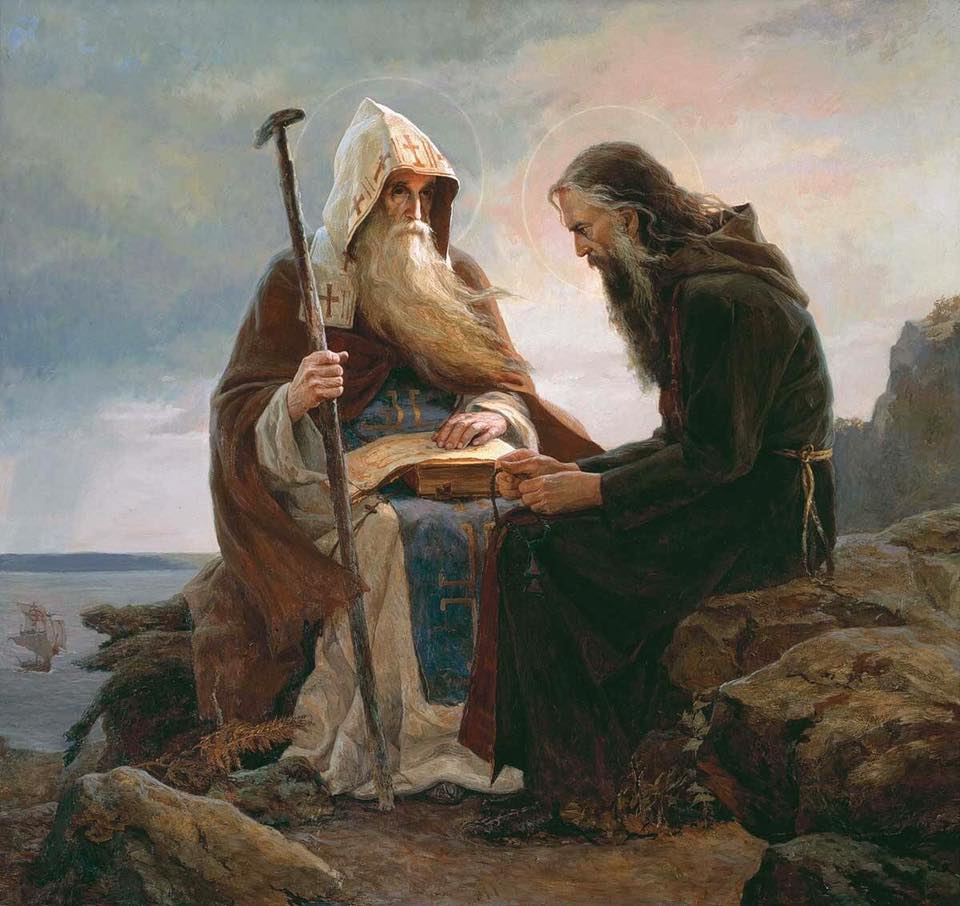 Although not considered as one of the sacraments of the Church since it is not essential to the Christian life as such and is not a necessary element for the very existence of God’s People, monasticism has played an important role in Christian history and is highly valued by the Orthodox Church.

In the Orthodox Tradition the monastic calling is considered to be a personal gift of God to the individual soul for his salvation and service to the Body of Christ. The monastic vocation is the calling to personal repentance in a life dedicated solely to God. The ultimate Christian virtue of love is sought by the monk or nun primarily through prayer and fasting, and through the exercise of the Christian virtues of poverty, chastity, humility and obedience.

The monastic Christian does not normally exercise any particular ministry in the Church such as that of priest, pastor, teacher, nurse or social worker. The monk is normally a layman and not a cleric, with each monastery having only enough clergy to care for the liturgical and sacramental needs of the community itself.

In Orthodox Christian history many missionaries, teachers and bishops have come from men with monastic vocations. For centuries the bishops have been traditionally selected from among the monks. These additional callings, however, are considered to be acts of God’s will expressed in his people, and are not the purpose or intention of the monastic vocation as such. Indeed, one must enter a monastery only in order to repent of his sins, to serve God and to save his soul according to the ideals of monastic ascetism. The ceremony of monastic profession indicates this very clearly. Thus, for example, Saint Herman of Alaska was first dedicated to the monastic life, and only then, in obedience to his spiritual father, left his solitude to become a great missionary.

The Orthodox monastic tradition has four classical ranks that apply equally to men and to women. The first step is that of novice, which in church terminology is called the rank of obedience. At this first stage the candidate for monastic profession simply lives in the monastery under the direction of a spiritual father or mother.

The second step is that of riasa-bearer, which means that the person is more formally accepted into the community, and is given the right to wear the monastic robe, called the riasa. At this stage the candidate is not yet fully committed to the monastic life.

The third rank is that of the small schema which means that the person is a professed monastic. He or she now receives a new name and wears the monastic schema (a cloth with the sign of the cross), the veil and the mantle (mantia). At this stage the person pledges to remain in the monastic community in perpetual obedience to the spiritual leader and to the head of the monastery, called the abbot or abbess (igoumenos or igoumenia). The service of profession, in addition to the hymns and prayers, includes a long series of formal questioning about the authenticity of the calling, the tonsuring (i.e., the cutting of the hair), and the vesting in the full monastic clothing.

The final rank of the monastic order is that of the great schema. This last step is reserved for very few, since it is the expression of the most strict observance of the monastic ideals, demanding normally a state of life in total seclusion in perpetual prayer and contemplation. With this final profession a new name is again received, and a new monastic insignia—the great schema—is worn.

In the Orthodox tradition there is no prescribed length of time that a person must remain in one or another of the monastic ranks. This is so because of the radically personal character of the vocation. Thus, some persons may progress rapidly to profession, while others may take years, and still others may never be formally professed while still remaining within the monastic community. The decision in these matters is made individually in each case by the spiritual director and the head of the community.

Although the Orthodox Church does not have religious orders as the Latin Church does, there are in Orthodoxy different styles of monastic life, both individually and in community. Generally speaking some monasteries may be more liturgically oriented, while others may be more ascetic, while still others may have a certain mystical tradition, and others are more inclined to spiritual guidance and openness to the world for the purpose of care and counseling. These various styles of monasticism, which take both a personal as well as a corporate form, are not formally predetermined or officially legislated. They are the result of organic development under the living grace of God.

In addition to the various spiritual styles of monastic life, three formal types of organization may be mentioned. The first is that of coenobitic monasticism. In this type all members of the community do all things in common. The second form is called idiorhythmic in which the monks or nuns pray together liturgically, but work and eat individually or in small groups. In this type of monasticism the persons may even psalmodize and do the offices separately, coming together only for the Eucharistic liturgy and even then, perhaps, only on certain occasions. Finally, there is the eremitic type of monasticism where the individual monks or nuns are actually hermits, also called anchorites or recluses. They live in total individual seclusion and never join in the liturgical prayer of the community, except again perhaps on the most solemn occasions. In the rarest of cases it may even happen that the Holy Eucharist is brought to the monk or nun who remains perpetually alone.

In the Orthodox Church today in the Western world there are only a few communities with a genuinely monastic life. In the traditional Orthodox countries monasticism still thrives, although with greatly reduced numbers due to the political and spiritual conditions. In recent years, in some places, there has been a renewed interest in monasticism, particularly among the more educated members of the Church.

By The Orthodox Church in America (OCA)